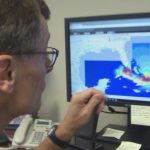 
In multiple interviews, Dr Luettich spoke on the unusually small impact of Hurricane Irma’s storm surges and floods on Florida and Georgia’s coasts. He focuses primarily on the less likely path Irma took down Florida’s west causing Florida to have much smaller storm surges on the west coast, but at the same time larger storm surges on the east coast as a result of the massive size of the hurricane. Georgia, on the other hand, received a much less powerful hurricane than expected as Irma slowly decreased to a tropical storm after going inland on the west coast of Florida.